Tarot is a type of cards with a distinctive structure: four suits plus trumps. The presence of trumps, or Major Arcana, is what makes tarot special.

As a beginner, you may confuse between Oracle Cards and Tarot decks because how similar their boxes look. But if you take a closer look, you will find that most Oracle Cards don’t have a fixed structure while all Tarot decks have four suits and trumps.

In most decks, the trumps are twenty two cards numbered with roman numbers and zero. They are usually The Fool, The Magician, The High Priestess, The Empress, The Emperor, The Hierophant, The Lovers, The Chariot, Strength, The Hermit, Wheel of Fortune, Justice, The Hanged Man, Death, Temperance, The Devil, The Tower, The Star, The Moon, The Sun, Judgement, and The World.

However, there are variations. The most common one is to switch place between Justice and Strength. Some decks will have different names for several cards. Death, for example, is Transformation in some decks because the word Death is considered to be too negative by the artist.

There are also some decks with more than twenty two trumps.

The four suits are also called Minor Arcana. In every suit, there are pips and court cards. Pips are numbered cards from one (Ace) to ten. Court cards are usually King, Queen, Knight, and Page. Many variations of court cards exist.

The power of tarot lies in its images. Or its symbols. Carl Jung once wrote, “The sign is always less than the concept it represents, while a symbol always stands for something more than its obvious and immediate meaning.”

All tarot cards are symbols. Tarot is a book of 78 symbols.

Tower, for example, is apparently a symbol of destruction. But it’s also more than that. It could be interpreted in many different ways. 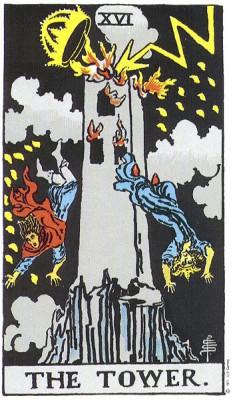 The Tower could represent a sudden crisis in a person’s life. People fear The Tower because they fear such crisis. But this card could also mean a person’s fear of such crisis while in fact everything is alright. The crisis could be end of marriage, loss of a job, death of a loved one, or get killed in an earthquake. The possibilities are many.

But this card is not limited to describing a person. It could mean some such crisis in an organization, industry or a nation. The music industry when facing the rise of MP3 and pirates is a good example. It is a crisis, and it makes people feel the world is over. The fall of an empire could be described with this card as well. This alone could link this card to many incidents in history.

This card could also mean revolution, since the tower is gray, it stands for something that is already dead and should be put down. So under the surface of destruction, there is actually liberation. The rise of MP3 make many people believe the music industry is over, then iPod comes and we can now listen to our favorite music from anywhere in the world legally. The rise of self-publishing threatens traditional publishers but it gives many authors a chance to let their voices be heard.

You see, this card represents ideas that are present in all areas of life, and even in history.

Such abstract ideas could be found in every Tarot card, and they can all be linked to historical events and personage, fictional character and story, one man’s life and the underlying emotion.

These ideas are what makes tarot fascinating.

Not the fancy cloths of some tarot readers, not people’s amazement when their problem is accurately described, and certain not the ghosts in the cards.

Underneath the deceptively simple image of every Tarot card there are rich and deep meaning and wisdom that most would never thought exist.

That’s what makes Tarot fascinating, and that is (perhaps) why some occultists would call tarot the key to the wisdom of the ages.

Many people are blind to these rich meanings, these symbols. They look at the cards and see nothing special, and so turn to the tarot reader to look for cheap mystery.

You may even be one of them. You may have sensed there is something in these cards that feels strange and special but you can’t name them.

It will happen soon enough, no need to hurry.