The Emperor in 500 Words 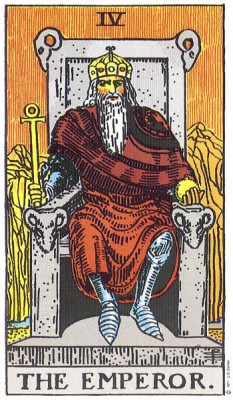 The Emperor is about rules. To rule a nation, to give command, to manage. And rules, regulations, systems, procedures. Then again, though not gender specific, most straight males like them.

The Emperor is associated with leaders and all aspects of leadership, like giving command, deciding the direction of a venture, and managing people. These qualities could manifest in good or bad lights, or good leaders and bad leaders. Bad leadership examples would be too much or too little direction given, not building a great team, etc.

The Emperor is also associated with arrogance, a vice found on many leaders. A leader has to believe in his own command or he is no leader at all. But when this goes to extremes it is simply the arrogance of “I am the boss so I can’t be wrong.”

Sometimes families are run by emotional demands. “Buy me a house so that I could feel secure!”, “Buy me a car to prove your love!”, or even “Leave your job to make me enjoy your attention!” Nightmares.

Why? Tarot cards are like characters in dramas, and we are like actors. We can play many characters. Even completely opposite characters. Because we are not them. Even if we identity ourselves with one character, that character is not all of us.

But maybe the problem now for many men and women is that they don’t know what characters to play at all. Should a woman devote to her family, or should she ditch men, become independent and pursue a career? Should a man provide for his family, or should he stay single because women hate to be dependent anyway? To add more chaos, how do straight people deal with LGBT people? What characters do they play and how are we supposed to interact with them?

It’s a good thing to tear down gender stereotypes, but without a new model, it also creates a hell lot of confusion. And by the way, now we are not supposed to talk about gender differences, we are supposed to pretend that women are just the same as men in every way.

If we are all the same, then how come that there are male toilets and female toilets?