The Empress in 500 Words 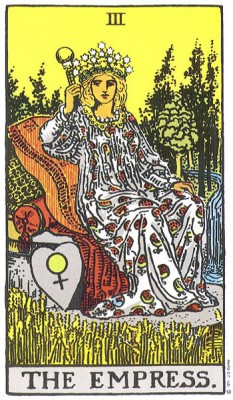 We can safely say that The Empress is the Mother. But then some will complain a father could still care for and love his children and answer their emotional needs.

So I have to add that The Empress is not about biological mother. Or adoptive mother. Rather, it is about the archetypal mother.

If this is still confusing, The Empress is more about the qualities and roles a mother often has. Like protecting one’s children, taking care of the home and filling it with love.

The Empress is about the family, and the emotion and blood that ties a family together. And many women do find family a very important part of their lives. Rather than cultural stereotypes, I believe this is more or less biological.

Many women seem to resend the traditional rule of a wife, criticizing that being dependent on a man is bad and there is no freedom. But then in a sense the traditional husband is also depending on the wife to provide him a lovely home and the all-important sex. We are all fools when we believe the other gender to be the enemy.

The Empress could also represent the influence of a mother figure. The actual mother, or someone that makes you feel at ease and protected.

There is also a sinister side to this card. In mythologies there are some goddesses that will eat their children. In real life, a mother rarely eats her children, but she could wreak havoc on them. Or at least before the children grow up. A cold and uncaring mother could leave a child with traumas that take decades to recover.

One key element of this card is emotion. A person represented by The Empress could help others better deal their own troubled emotions. On the other hand, if this person has her own emotional problems, then people around her will suffer. She will blame everyone around her and she can’t be argued with.

Reason is itself a Yang quality and is associated with The Magician and especially The Emperor. It could be controlled and directed.

The High Priestess and The Empress deal with Yin qualities such as biological influence and emotions. They should be listened to, not commended.

The Empress, in its best possible status, would be a master listener. She would listen to the emotions of herself and of others. By doing so, a bad emotion wouldn’t be denied, wouldn’t express in inappropriate situations, and wouldn’t be ignored either. It will flow away like tears.

And surely a man deals with emotion as well, another proof the cards ain’t about genders. If men can’t learn to deal with emotions, I wouldn’t be able to write this post or understand that there are inner forces that simply couldn’t be controlled. Though as a man, I still hate this and still want to control everything and anything.