Wheel of Fortune in 500 Words 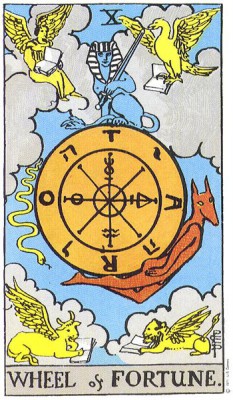 Wheel of Fortune is about change, and how unpredictable change is.

In older decks it shows a wheel of how men rise to power and fall. The wheel is controlled by the blinded Fortuna. It basically says our fate is not decided by us, our efforts doesn’t matter, because of chance we could rise to power, but because of chance we could fall from it too. It emphasizes how unpredictable life is and how powerless we humans are.

It is a rather pessimistic belief that some believe reflected the thoughts of that time.

While we may not go as extreme as to say that we control nothing in our life, change is still unpredictable. Few people predicted the rise of Internet and personal computer. Few could predict war. The world around us changes constantly and we basically don’t know what comes next.

Aside from changes in the world, the changes in a person’s life is unpredictable as well. Or as least it seems so. Nobody is ever ready for a break up, or the loss of a loved one. Nor can we foretell when and how we will meet our next lover. Maybe you heard from a friend that another friend was organizing a meetup, and when you got there, you met someone attractive and you fell in love.

Wheel of Fortune is more about the unpredictable nature of life than any particular events. That’s what sets it apart from The Tower, which is also a sudden disaster. The Tower also emphasizes that the disaster only seems sudden, it’s something that will happen sooner or later.

Wheel of Fortune is also often interpreted as an unpredicted turn of events that sends you to a new journey. You might be working on your own project when your friend suddenly invites you to join his startup. Or you might experience love at first sight just when you are about to kill yourself.

Another aspect of Wheel of Fortune is chance and probability.

This aspect connects Wheel of Fortune to gambling, which seems to be governed by chance but is really a mathematical problem of probability. By extension Wheel of Fortune is also associated with the thrill gambling brings and how gambling could ruin one’s life.

In a reading, this card could be saying that a venture is actually a gamble, or that on the surface things seem random, but underneath there is some reason and principle to it. For example, losing all money in the lottery is not unlucky, it’s just stupid.