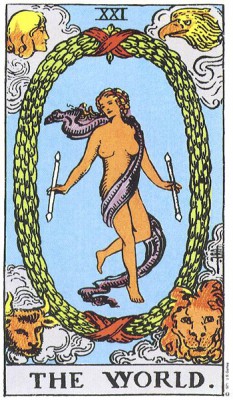 The World is about harmony between opposites. Instead of freedom without limit, you can do whatever you want within a certain limitation. Instead of unlimited growth, you grow to a point of satisfaction. Instead of achieving your ideals, you find a balance between ideal and reality.

I used to say a lot that how The World is about dancing within your limitations. It’s not that you destroy every enemy standing in your way and finally get whatever you want. It’s that you realize that sometimes there are something that you could never get your hands on, and you make peace with that fact.

You learn to live with life’s disappointments. Bad things happen to you, you fail short of your goals, somebody died, you feel terrible, but you learn to live with all that while still feeling life is generally satisfying and happy. This is the mastery of life, and it doesn’t mean that you get  whatever you want. Rather, it’s an inner mastery, it’s learning to accept what you cannot change while still acting actively to change what you can.

Many people mistake this for a happy ending typical in Disney movies, where the prince and the princess are happily ever after when they have gone through all these troubles. That happily ever after doesn’t exist. In real life, relationship is constant work, the more you dream of a happy ending, the less you will look at the relationship at hand and the less you will do to make it work.

This post concludes the Tarot in 500 Words series, it will also likely be my last post on Tarot. After a long inner struggle, I gave up and admitted to myself that my journey of Tarot was over a long time ago. What I am writing now is basically no different than what I wrote one year and a half ago (just in a different language). I don’t read Tarot books anymore, I am not as interested in interesting decks anymore, I’m even no longer interested in spiritual topics in general. My passion in Tarot was great because I need it to solve my problems. These problems are no more. In the end, maybe I was just a querent who refused to get help so he picked the cards himself.