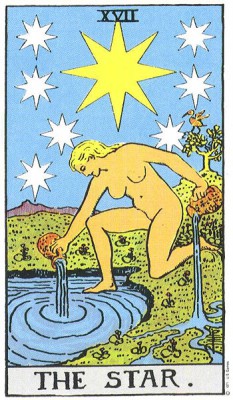 We say that The Star is hope. What hope? Hope in times of desperation, hope after disaster. After all, the maiden in the card is so poor that she has no cloths (that’s a joke).

Depending on the situation and your opinion, this could be despairing or liberating. You could be a young man ready to make your dent in the universe, but at the same time you may have trouble finding a job. You can focus on the miserable present and say that only this is real, or you could have hope and say everything will be better someday.

Sometimes it will be hard for you to believe a better future, because it seems so out of reach. You might be working really hard and still getting nowhere close to your goal. Or your process could be so slow that you begin to believe you will only make it in your fifties.

This could be about making money, this could be about becoming a writer, or an artist, or pursuing your dream. No wonder this card is associated with all kinds of art and creativity. Seems to me that every writer and artist was once broke, maybe even broke for life, while making hollow promises that someday they’ll make it big.

But some of them do make it big. We all know stories about how an unknown author wrote a bestseller novel and went on to live a good life. This card is about hope, about that it’s possible for you to make it big as a writer, not about how much likely that will happen. It appears that most writers don’t make it until they have already written millions of words.

When not about art or make a living, The Star could simply be talking about that it’s time for you to move on and start again. You may have finished complaining about your ex, or stopped drinking all day for losing a job, and it’s time for you to start doing something productive. You may start dating, you may start job hunting. You still haven’t solved those problems yet, but you are beginning to do so.

This card is also associated with souls and ideals. We could interpret it as saying that we spend our life trying to pursue an ideal self that will always feel so distant. We could be loving others, supportive, and hardworking, we could be having a nice house, nice body, nice friends, but somehow we will always feel not enough. But that’s okay. We are supposed to be imperfect. That’s being human.