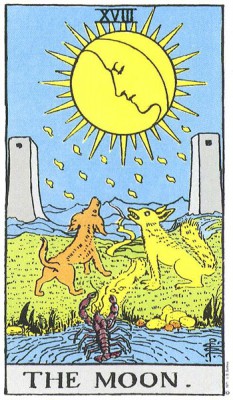 The Moon is fear, madness and the power of imagination. Strength deals with fear too, but in The Moon the fear is running wild. Instead of knowing that you fear being hurt emotionally, you might begin imagining how someone put a knife through your throat, or a terrible dragon-like monster lurking in the shadows, ready to take your life.

Apparently these imaginations will make you anxious. And it could drive you mad because you can’t keep them away. Ever afraid of the dark, or the ghosts? Then you must know that it’s very hard to force yourself not to think about what you fear, or how the ghosts look like.

Sometimes the fear is mild. You may just doubt whether you locked the door every time you go out, or need to make sure all windows are locked before going to bed. Sometimes it becomes paranoid. Based on slightest evidences, you might be convinced that someone is mean towards you, or is trying to hurt you.

How do you deal with this paranoid? I’m not sure I know the answer since I’ve never been paranoid to the point of being pathological, but when I do become anxious and worried about what might happen, I would remind myself that it’s my own fear and it has nothing to do with reality. It works for me.

An unproductive way to deal with this problem, or maybe any problem, is to blame others, to believe others are responsible for your fear. This happens a lot in relationship. Instead of admitting one’s own fear of not being loved, you see people doubt whether their partner has fallen in love with someone else. The logic goes like this: “if he is faithful to me, then I should not feel insecure at all. Since I feel insecure, he must be unfaithful.” It’s the same as saying, ghosts must exist since you fear them.

It seems as if your imagination is running wild exactly because you can’t name your emotion. People who blame their fear on their partners don’t seem to know that they are afraid or feeling insecure. For a long time I have a mild fear of female ghosts in the night, then one day it occurred to me that maybe it’s about how I fear others’ negative emotions. I tend to be heavily affected by others’ negative emotions, especially when expressed in a harsh and blaming manner. I have been unware of that fear. It then presents itself as a ghost haunting my mind.