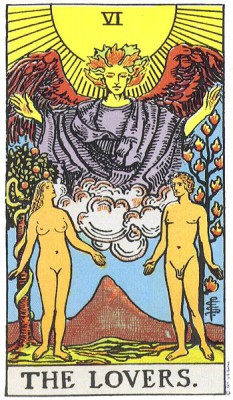 The Lovers is about choice. It’s also about relationship, affection, and love. How are these things connected? We could point to older decks and say in older decks a man has to choose between his mother and his lover.

Or we could try another explanation. The Empress and The Emperor represent influence from the family, The Hierophant influence from teachers and school. They’re all people that tell you what you should do in childhood. The Lovers could represent when you grow a little older, you have to make choices on your own.

Instead of the one way path that The Hierophant has shown you, you now see options. You also come into contact with the other gender, someone that is completely different from you. By choosing what path to take, and by knowing the difference between genders, you now come to know a little bit more about yourself. You’re developing your ego.

This development often leads to conflict with teachers and parents. So The Lovers is associated with the infamous teenage rebellion. It’s really not about rebelling against something, but more about growing towards an independent adult.

This could also mean the end of childhood that seems all joyful and the beginning to know conflict and frustration.

In a reading, The Lovers surely won’t always mean teenage rebellion. But it could mean similar situations. Like when a team that has been working together very well begin to disagree with each other. Or when one is no longer willing to be in a company that one has been in for a long time.

The Lovers in a reading could also derive its meaning from other aspects, like communication and union. It could mean that two people are joining forces to work on a single problem. It could mean an exchange of ideas. Or in case of reversals, an exchange that doesn’t work out.

This card could also mean the expression of one’s self or his own opinions, instead of repeating words of guru. Maybe that’s why this card could be associated with the element air, an element of words and speech.