The Hierophant in 500 Words 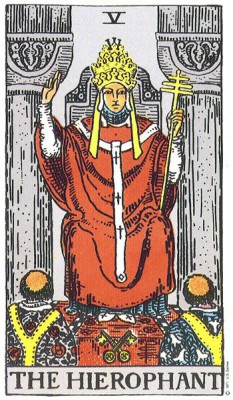 People hate this card. Traditions, schools, churches, teachers, a bunch of people and doctrine to yell at you about what you ought to do and what’s forbidden.

In a sense, this is a good thing, as blindly following orders will turn you into but a slave. But once again there are positive and negative attributes of a card. Just because you see one side of the coin doesn’t mean the other side doesn’t exist.

Or to put it another way, the cards are neutral, it is the humans who judge it to be good or bad. And whether we judge a card as positive or negative, we can always find proofs for the opposite view. Because the cards are natural.

So what is good about The Hierophant? What is so good of teachers and societies and culture telling you what to do? Firstly, they help you adapt to the society and survive. Secondly, civilization is the foundation of your life.

Now you should be asking, The Hierophant represents the civilization? How? Ain’t it just annoying teachers who keep telling me what to do? Well, why does your teacher keep telling you what to do? So that you could be a functional adult of society.

Without civilization, without society, all your money will be worthless and you will have to hunt food for yourself.

Of course I don’t mean that you should praise society and follow whatever people tell you to do. What I mean is that this is not a “us against them” thing. Even if you rebel against traditional values like getting a job, the society still supports you with food. You still need to make money and thus make a contribution to the society. You see, it’s complicated.