The Chariot in 500 Words 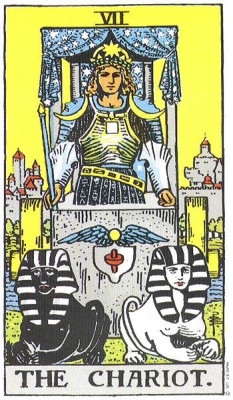 The Chariot is a mighty warrior on a splendid chariot pulled by two conflicting horses. The multiple possible interpretations line up with elements in the image nicely.

The first element that we will discuss is the mighty warrior on a chariot. This means victory, triumph, and success. Thus, in readings about success of a project, this card is often good news. Sometimes, there may really be a person in a car showing off all his successes!

This card could also means pushing forward instead of victory. Or we could say it is the warrior before triumph. Like a man working on a PPT overnight before his big presentation. In this case, The Chariot means both his triumph and the effort he puts into it.

His serious face and the presence of a staff symbolizes willpower. “I will do whatever necessary to achieve my goals!” He seems to be saying. But what is the difference between his willpower and that of The Magician? Well, in this card, there is a catch, there is something against him.

At the bottom of the card there are two Sphinxes of opposite colors. Since their colors are opposite, they most likely want to run in different directions. They’re controlled and restricted by the charioteer. But if the charioteer weakens his will for even a tiny second, the chariot may be torn apart by these mighty beasts.

This symbol could mean different things in different situations. The most common interpretation is emotion repressed by will. Like a man works hard on a job he hates. Once he loses control over his own hatred, he may do irrational things and ruin his own career.

We can also have other interpretations. Like a man leading two men who don’t agree with each other. Or an organization who puts its inner conflict aside because of a charismatic leader. Or when the boss enters office everybody stops arguing and pretends to be working.

This card as a whole, represents what happens when we adapt to the society. We get a job and work hard on it though we may not really like it. We put up an appearance of professionalism and hide our uglier selves. We post all kinds of beautiful pictures on social networks and tell no one how terrible our life really is.

In this case, this card means victory for show, and pretending to be successful. It means that we tried our best to be a contributing part of the society but we never try to be more than a cog in the social machine. Everybody thinks we are happy but we secretly resent this good life because it is not what we want but what has been forced upon us by parents, teachers, and society.

But in reality it’s our own fear of expressing ourselves that drive us to do just what we are supposed to do. This proves again that every Major Arcana can be seen as the opposite of the one before it.