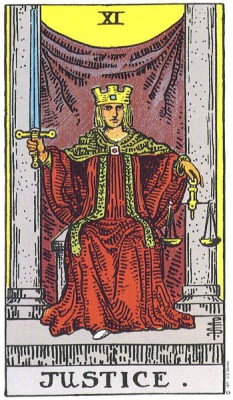 Justice is associated with, well, justice. The legal system, lawsuit, or being righteous, just, doing the right thing.

Since lawsuits are rather rare, a more common interpretation would be that you will get what you pay for. Buy a cheap computer? It’s surely cheap for a reason. Asking about an exam? Well, you will get a score you deserve.

Accordingly, when reserved, this card would represent unjust, that you don’t get a fair treatment, don’t get what you pay for, etc.

But there could be a twist. You may be fired for not doing a good job but you have tried your best. It’s fair in that you didn’t do a good job. It feels unfair because you get fired even though you have worked hard.

Or what about this? The company fired you not because of your fault but because it’s having serious financial problems. It’s justified but it doesn’t feel fair.

These situations show us that sometimes justice is not black and white. Sometimes it could be confusing.

Perhaps more confusing is when Justice appears in a reading about relationship. It could mean clarity and doing the right thing, like ditching your asshole boyfriend. But it is also a card that strongly emphasizes reason and not feeling, which means while deciding to ditch that boyfriend, you are ignoring his feelings and more importantly, your own feelings.

Sometimes life is more about doing the right thing. Suppose that you are sometimes anxious and need your partner to comfort you, it is very right to seek his comfort. But what if you did it too often and your partner begins to complain? Do you argue how right you are? In this situation, arguing is also ignoring your partner’s feelings. Now, is it right to do that?

In the older decks the goddess in this card is blinded. This is intended to show that justice is objective, regardless of who you are or how powerful you are. It could be also be interpreted as that obsessed with being right could blind you to everything else.

Like any other cards, too much Justice becomes a problem.